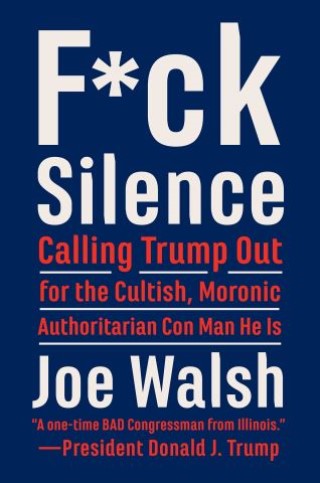 Calling Trump Out for the Cultish, Moronic, Authoritarian Con Man He Is

Donald Trump is the exact threat our Founding Fathers feared.

Joe Walsh is as rock-ribbed a conservative as they come. But he believes that no right-wing policy victory is worth the loss of our very democracy.

In this clear-eyed and unsparing book, Walsh makes the case that Trump has more in common with the foreign dictators he praises publicly than a predecessor like Ronald Reagan. Trump is an existential threat to conservatism, the presidency, and national unity. He has violated the Constitution in plain sight, assaulted democratic institutions, overwhelmed the country with disinformation, erected around himself a cult of personality, and governed according to his narcissism more than any discernable political philosophy.

Though Walsh agrees with Trump that the Washington elite has hung working-class America out to dry, traveling down the road to despotism is no response. And now a person who places himself above the rule of law and accountability sits in the Oval Office—all that’s missing is a big, beautiful throne behind the Resolute Desk.

In F*ck Silence, Walsh challenges his countrymen, especially his fellow conservatives, to acknowledge and oppose this unpatriotic and un-American behavior before we give away what made America great in the first place: our democracy.