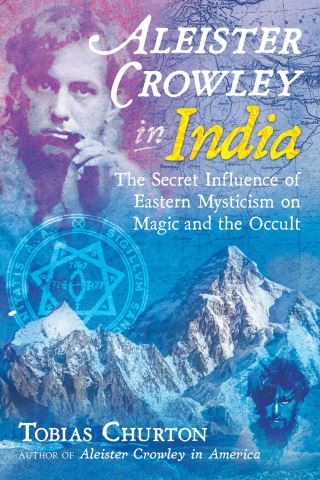 The Secret Influence of Eastern Mysticism on Magic and the Occult

Follow Aleister Crowley through his mystical travels in India, which profoundly influenced his magical system as well as the larger occult world

• Shares excerpts from Crowley’s unpublished diaries and details his travels in India, Burma, and Sri Lanka from 1901 to 1906

• Reveals how Crowley incorporated what he learned in India--jnana yoga, Vedantist, Tantric, and Buddhist philosophy--into his own school of Magick

• Explores the world of Theosophy, yogis, Hindu traditions, and the first Buddhist sangha to the West as well as the first pioneering expeditions to K2 and Kangchenjunga in 1901 and 1905

Early in life, Aleister Crowley’s dissociation from fundamentalist Christianity led him toward esoteric and magical spirituality. In 1901, he made the first of three voyages to the Indian subcontinent, searching for deeper knowledge and experience. His religious and magical system, Thelema, shows clear influence of his thorough experimental absorption in Indian mystical practices.

Sharing excerpts from Crowley’s unpublished diaries, Tobias Churton tells the true story of Crowley’s adventures in India from 1901 to 1906, culminating in his first experience of the supreme trance of jnana (“gnostic”) yoga, Samadhi: divine union. Churton shows how Vedantist and Advaitist philosophies, Hindu religious practices, yoga, and Mahayana and Theravada Buddhism informed Crowley’s spiritual system and reveals how he built on Madame Blavatsky and Henry Steel Olcott’s prior work in India. Churton illuminates links between these beliefs and ancient Gnostic systems and shows how they informed the O.T.O. system through Franz Hartmann and Theodor Reuss.

Churton explores Crowley’s early breakthrough in consciousness research with a Dhyana trance in Sri Lanka, becoming a devotee of Shiva and Bhavani, fierce avatar of the goddess Parvati. Recounting Crowley’s travels to the temples of Madurai, Anuradhapura, and Benares, Churton looks at the gurus of yoga and astrology Crowley met, while revealing his adventures with British architect, Edward Thornton. Churton also details Crowley’s mountaineering feats in India, including the record-breaking attempt on Chogo Ri (K2) in 1902 and the Kangchenjunga disaster of 1905.

Revealing how Crowley incorporated what he learned in India into his own school of Magick, including an extensive look at his theory of correspondences, the symbology of 777, and the Thelemic synthesis, Churton sheds light on one of the most profoundly mystical periods in Crowley’s life as well as how it influenced the larger occult world.

Tobias Churton: Tobias Churton is Britain’s leading scholar of Western Esotericism, a world authority on Gnosticism, Hermeticism, and Rosicrucianism. He is a filmmaker and the founding editor of the magazine Freemasonry Today. An Honorary Fellow of Exeter University, where he is faculty lecturer in Rosicrucianism and Freemasonry, he holds a master’s degree in Theology from Brasenose College, Oxford, and created the award-winning documentary series and accompanying book The Gnostics, as well as several other films on Christian doctrine, mysticism, and magical folklore. The author of many books, including Gnostic Philosophy, The Invisible History of the Rosicrucians, and Aleister Crowley: The Beast in Berlin, he lives in England.